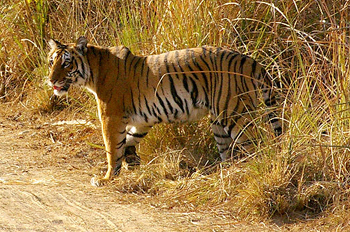 was the first Tiger Reserve under the project in India. So from that point of view Corbett is one of the oldest as well as the largest national park of India. The park is an ideal home for many majestic animals like the Royal Bengal Tiger, Asiatic Elephant and many other wild animals. Due to healthy population of wild today, Corbett is one of best preserved parks with 164 numbers of tigers and over 600 elephants. As per the recent survey Corbett reveals the highest density of population of tigers in the country at 20/100 square kilometers.

The tiger is not only the star attraction of the Jim Corbett National Park but is the most celebrated of the wild animals in India. This wonderful creature of God symbolizes the power of nature and finds an important place in our culture, mythology and legends. The majesty has been treated and worshiped as the ruler of the forest.

It is said that tigers have evolved in East Asia (China) about two million years ago. After that they spread to other parts of Asia. Altogether there are eight subspecies of tiger, out of which three have gone extinct. It is a matter of pride for India that the country gives shelter to the largest population of wild tigers in the world. According to recent census it has been estimated to be only 5000 to 7500 tigers surviving in the world. The subspecies Royal Bengal Tiger has 3000 to 4500 surviving members existing in Indian subcontinent, more than three-fourths of which are in India.

The Terai-Bhabar region, including the area of Jim Corbett National Park was once the best habitat for tigers but recently has reduced at great extent due to deforestation took place in these areas and land use changes.

The tiger has always had a deep relation with the confined area of Jim Corbett National Park - either through the useful writings of Jim Corbett and other hunter. Corbett gave birth to Project Tiger in India - India's first tiger conservation program inaugurated on first April 1973.

Tigers attack wild boar, deer (preferably chital and barking deer) and Sambar while the majestic is on hunt. They choose the largest prey of species since larger prey gives more enrgy for the energy spent. The presence of sound population of sambar is believed to be a good indicator of the presence of tigers in the Corbett. Sometimes, tigers also hunt young of elephants and take smaller species, including birds, reptiles, fish and monkeys.

Tigers in India have the greatest reputation as man-eaters among the large cat species. Such tigers have been immortalized through the writings of Jim Corbett. For instance, The Champawat Tiger is said to have killed 434 people before Corbett finally succeeded in killing it.

Tiger is kept on top of the food pyramid as they are carnivore and a master predator. It helps in maintaining and controlling the ecological balance of the park.