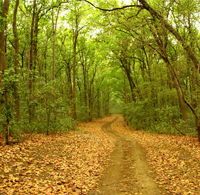 The Jim Corbett National Park is blessed with the natural bounty in the form of distinct flora which comprises of fresh water flora and alpine flora. Extent over an area of more than 521 square kilometers the Corbett has diverse floral count that is absolutely astonishing. The various habitat types of Corbett is occupied by Sal forests, Khair-Sisso forests, Mountains, Chaur, and rivers and streams that owes their distinct assemblage of plants. According to botanical survey of India Corbett has 600 species of plants - trees, shrubs, ferns, grass, climbers, herbs and bamboos. These many distinct varieties of plant kingdom makes the national park sought after wildlife destination for those who wish to relax from hectic schedule of working throughout the year.

Being one of the richest home of wild animals, the Jim Corbett National Park is rich in flora too. More than 75% of the total area of the Corbett is dominated by Sal forests.

Sal, Khair and Sissoo are the most visible trees found in Corbett. Though, there are several other species that contribute to the sound diversity of Jim Corbett are scattered throughout the park. Chir Pine is the only conifer found in the park. Some part of the Corbett is dominated by Bamboo forests. The main species is Male Bamboo (Dendrocalamus strictus) having clustered stout stems and shining papery stem sheaths. Bamboos follow a peculiar flowering process. All bamboos in a forest flower together at the same time once in several decades. After flowering, fruiting and dispersal of seeds, all individuals die together.

Green is the fundamental color of nature and variety of flowering trees in Corbett lend that beautiful color to the forests. The forests of the Corbett is dominated by numerous flowering plant, some of them can be named as Kachnar (Bauhinia Variegata) with white tom pink flowers, Semal (Bombax ceiba) with giant red blooms, Dhak or popularly called as the flame of the forest with bright and eye pleasing orange flowers, Madaar or Indian Coral (Erythrinia indica) with red flowers and Amaltas (Cassia fistula) with bright yellow chandelier like blooms.

Though, some species of trees that do not occur naturally in the park have been artificially planted in and around the habitation of the park. These include Teak (Tectona grandis), Silver Oak (Gravillea robusta), Eucalyptus, Jacaranda (Jacaranda mimosaefolia) and Bottlebrush (Callistemon viminalis), and can be seen in and around forest rest houses inside the Corbett Tiger Reserve area.

Floor of the Corbett forest is also dominated by the several species of Ber (Zizyphus) found in open areas and is boon for many birds and animals providing food and habitat to them. Maror Phali (Helicteres isora) is an easily noticeable shrub. If you look at the fruits of this amazing shrub, they are in the form of twisted spiraling pods. Jhau is different kind of shrubs found along the Ramganga basin on sandy or rocky soil.

It is quite interesting to explore the vegetation type of Jim Corbett National Park. We find some of the Corbett vegetation is covered with bamboo forest. Main species existing is named as Male bamboo having clustered stout stems and shining papery stem sheaths.

Corbett's floral diversity is mind boggling. In association with bhabar about 110 species of trees, 51 species of shrubs, 27 species of climbers and 33 species of bamboo and grass are found. The dominant species of tree is evergreen Sal (Shorea robusta) and its associate tress which is found over 75 % of the total area. In a few areas pure stands of sal are found. Trees like the Sheesam (Dalbergia sissoo), the Kanju (Holoptelea integrifolia)-trees which can be seen scattered liberally all around its ridges, the ber (Zizyphus mauritians), dhak (Butea monosperma), and bael (Aegle Marmelos). Besides these, other varieties of flora in Corbett include the occasional simal (Bombax cieba), jhingan (Lannea coromandelica) and khair (Acacia catechu) which bear flowers during summers just before the advent of the spring is found along the Ramganga river.