A niche set on the foot of the Himalaya and secluded within the border of Uttarakhand, the Jim Corbett National Park, acknowledged as the first national park in India, is an ultimate wilderland where one can visualize of an ideal forest camping amidst the vast rich and intense verdure. Its exotic landscape, from the whispering pastures crisscrossed by off ramps to the dense echoing woods dotted with varied flora and fauna, makes Jim Corbett National Park an adventurer's den and lensman's diorama. Over the years it has witnessed an increasing number of travellers from different corners. Nonetheless having strategically located encircling few major cities in India, the national park makes it an easy escape and runaway from the cityscape for the weekenders.

Named after Major Jim Corbett, the Jim Corbett National Park was originally founded by Sir Malcolm Hailey in the year 1934 who supported the proposal for the sanctuary and wanted the enactment of a law to give it protection. Prior to the British Rule, the vast stretch of the forest was under the control of the princely state of Tehri Garhwal. Later in the early 19th century the ownership was passed onto the East India Company who were actually about to make business out from the forest resources. In the mid of 19th century, Major Ramsay took rigorous steps to protect the natural verdure and its resources and by his order farming was banned in the lower Patlidun valley and thereafter domestic animals were resettled to a secluded land and a regular cadre of workers were assigned to prevent the forest from felonious acts. In the year 1879 the Forest Department declared it as a reserve forest under the forest Act. Later in the year 1936 the boundary of the park were demarcated to 323.75 square kilometers and were declared as the first national park in India and was named as Hailey National Park. In the year 1955 the park was renamed as Ramganga National Park and later again renamed to Jim Corbett National Park in the year 1956. Over the years the park extended its area and included within its boundary the entire Kalagarh forest division. It was in the year 1974 when wildlife preservationists and naturalists from around the globe launched the PROJECT TIGER. The Corbett Tiger Reserve project was the most prestigious and biggest total environmental conservation project ever undertaken.

The Jim Corbett National Park ranges between an altitude from 360 mts to 1040 mts covering an area of 1,318.54 square kilometres including 520 square kilometres of core area and 797.72 square kilometres of buffer area. The park itself is secluded between the Lesser Himalaya in the north and the Shivalik range in the south. It maintains a humid subtropical and highland climate and confines within the area numerous rivulets that cut cross its way down en route small plateaus and ridges.

Dotted within the whispering grasslands and dense forest the Corbett wildlife sanctuary hosts more than 500 species of resident and migratory birds have been categorized, including the crested serpent eagle, blossom-headed parakeet and the red junglefowl, varied species of reptiles, amphibians, fish and insects. Due to the abundance of camouflage in the reserve, tigers, though behold the virtue within the forest, are hard to spot. If you are lucky THEN SURELY YOUR experience is going to ACCLAIM a grapevine and be a part of your travel blog. In addition the park also score a good number of leopards, barking deer, sambar deer, hog deer and chital, Sloth and Himalayan black bears, Indian grey mongoose, otters, yellow-throated martens, Himalayan goral, Indian pangolins, and langur and Rhesus macaques.

The Jim Corbett National Park is popular for its vast rich and intense verdure. It preserves more than 500 species of plants, spotted amidst the thick Sal, Sissoo and Khair grove. Nonetheless one can easily spot Chir pine, which is the only conifer of the park and Banj Oak, which is essentially a Himalayan species. Other major tree species are Kanju, Date Palms, Jamun, Aamla, Bel, Kusum, Mahua and Bakli. 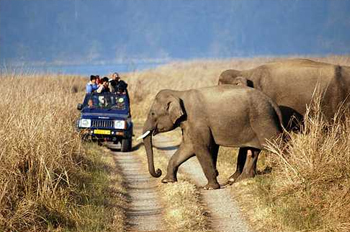 The best time to visit the Jim Corbett National Park is from November to June. In the course of winters, if you are fortunate enough, you can spot tigers, all along the best time to behold the sight of varied species of birds and other animals. MEAN WHILE summer it's advisable to escape from the heat and AT THE TIME OF monsoon one can seek for a peaceful trek and walk along with VIEWING diverse FLORAL PARK. Jhirna and some other buffer zones remain open in this season.

Inside the Jim Corbett National Park, which is granted as one of the Tiger Reserves in India, a general tourist needs to keep intact certain rules. The prior rule one has to keep in mind is to drive slowly and blow no horn. Next, you should not hive off to off ramps or restricted areas from the routes. Thereafter the tertiary does not play your stereo inside your car. It is advisable to keep safe distance from wild animals and when you have entered an eco-tourist destination do not carry thin cans, plastic, glass bottles, metal foils and liters. Lastly you are in a no smoking zone and LEAST POINT don't get disappointed if you do not spot a tiger.